Your 2050 dystopia is weirdly optimistic

TLDR: I urge everyone to join the conversation on how we can create art that more accurately reflect the challenges of our time.

Picture this: A sprawling megalopolis covered in smog. The faint glow of neon signs and giant LED screens displaying the latest advert for the latest high-tech drug. Constant aerial traffic of flying cars and a spaceship is now boarding for the moons of Jupiter. Police wearing full body exo-skeleton armor patrol the crowded, lively streets. While underground networks of ultra-libertarian hackers fight for the rights of the digital commons, religious sects try to outlaw consciousness transfers.

Sounds familiar? It's basically every other sci-fi world imagined after Blade Runner.

I'm allowed to talk crap about this image because I painted it.

Here's the thing, Artists have a huge role in influencing the subconscious narrative of humanity
we got into Art because it was fun, for some of us it's also how we make a living now.

Problem 1: It's rooted in the (mostly) outdated challenges and imaginary of the 80's

Good sci-fi is usually a projection of human challenges and moral/philosophical dilemmas projected into the future. But did you ever notice how most old sci-fi looks very dated? 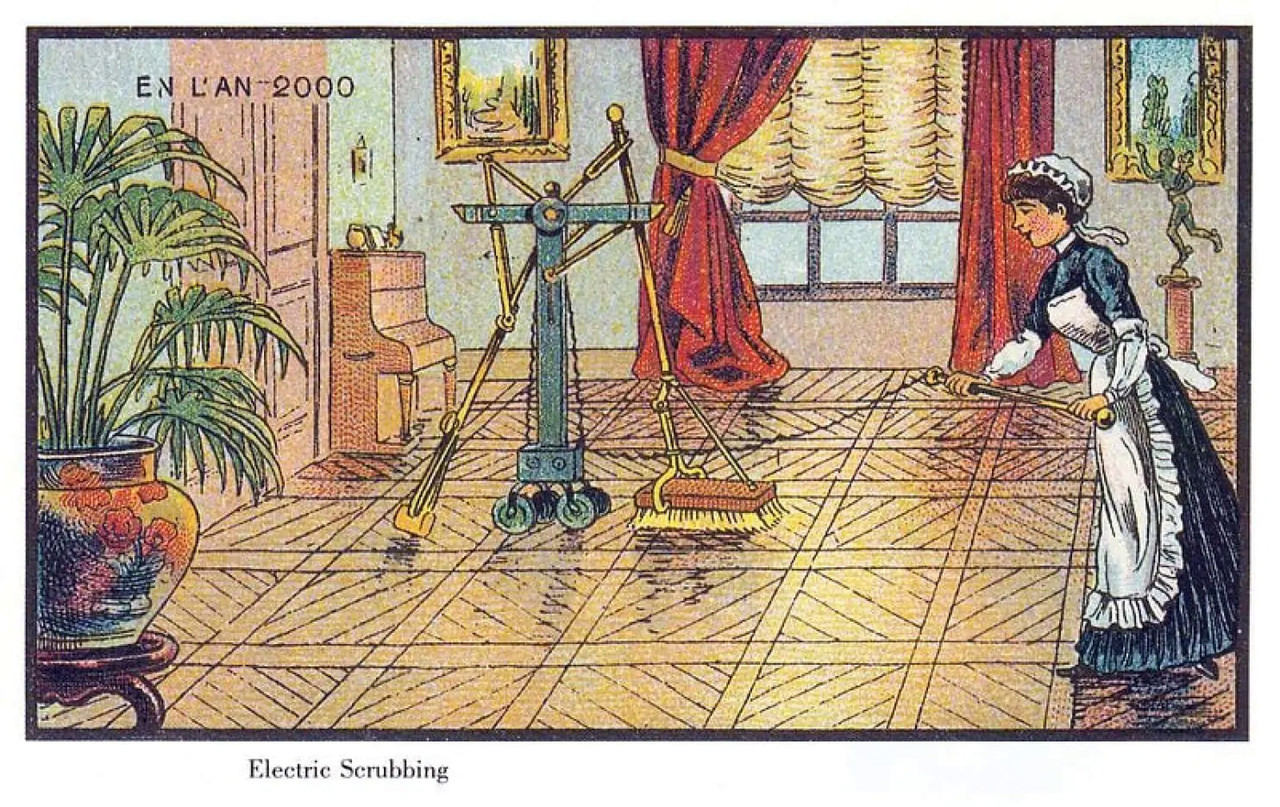 This comes from the fact that human imagination is usually locked by our surroundings. For example with this electric scrubber: mass produced mechanical parts were the new hot thing in 1900, so it makes sense that a "cleaning machine" would extrapolate based on this. What most people in 1900 couldn't imagine is that sucking air is way more efficient, but they couldn't think of it since there were not much pneumatic technology around the life of the average citizen.

So here's my problem with almost every concept artist (including me!) loving Blade Runner so much ; It's reinforcing an 80's imaginary of the future. Meaning it's the future, but viewed from 1968-1980.

I'm going to focus on Energy, because most other problems are a result of this. 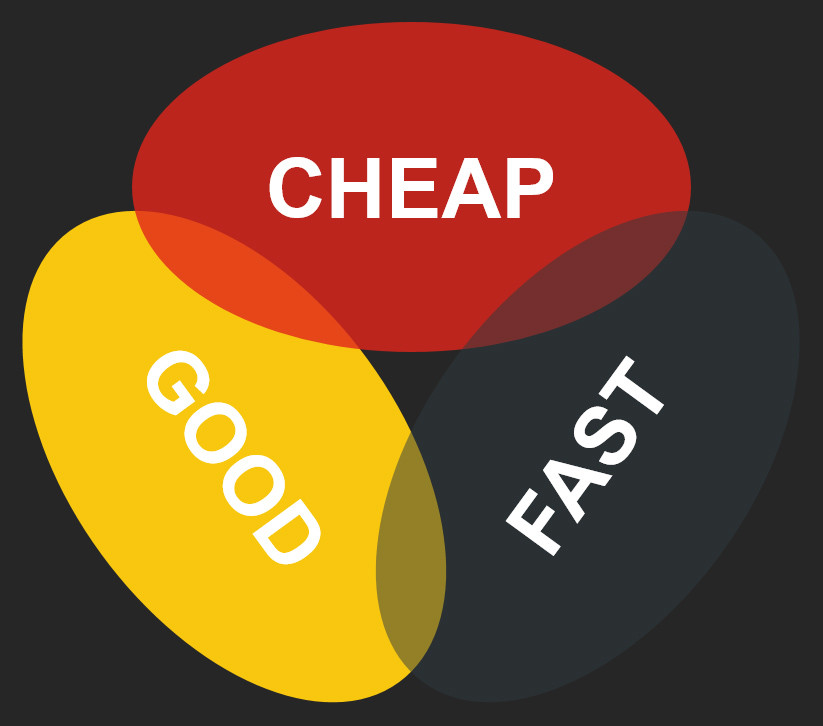 Remember those memes about graphic design/art? Where you can't get it all at the same time? 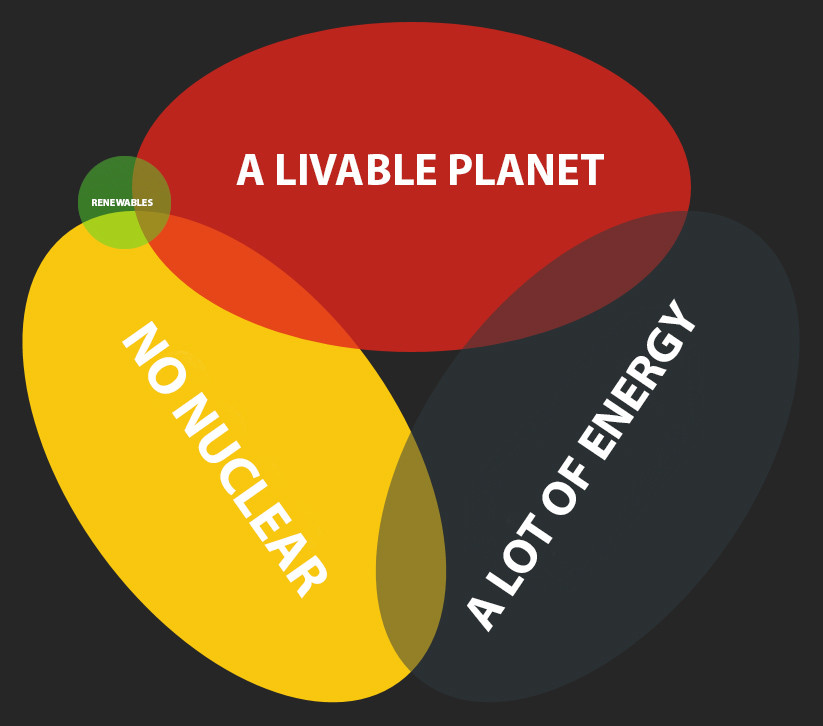 We basically have the same challenge, most of the world population think we can still have it all.

Look at the correlation between energy consumption and CO2 emissions: 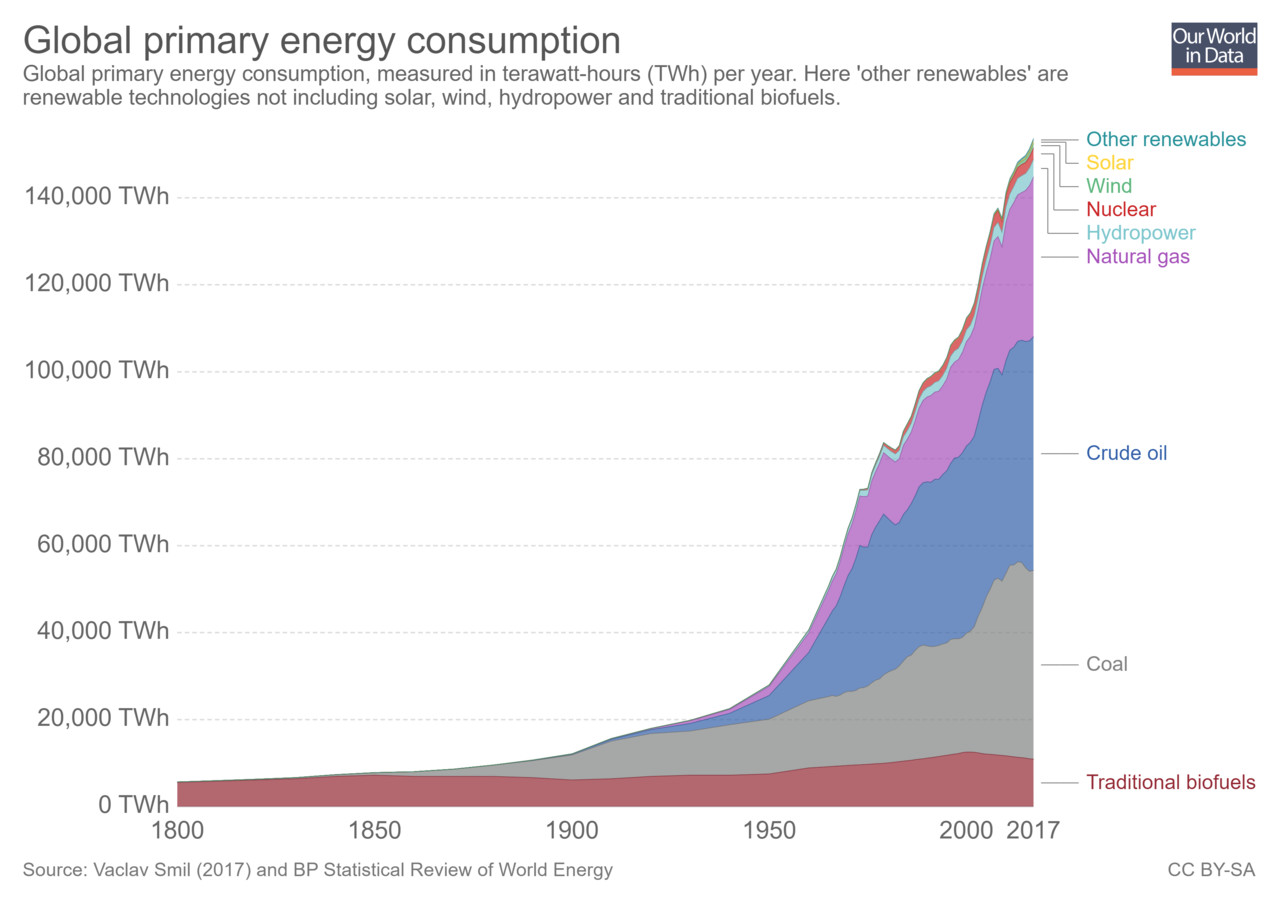 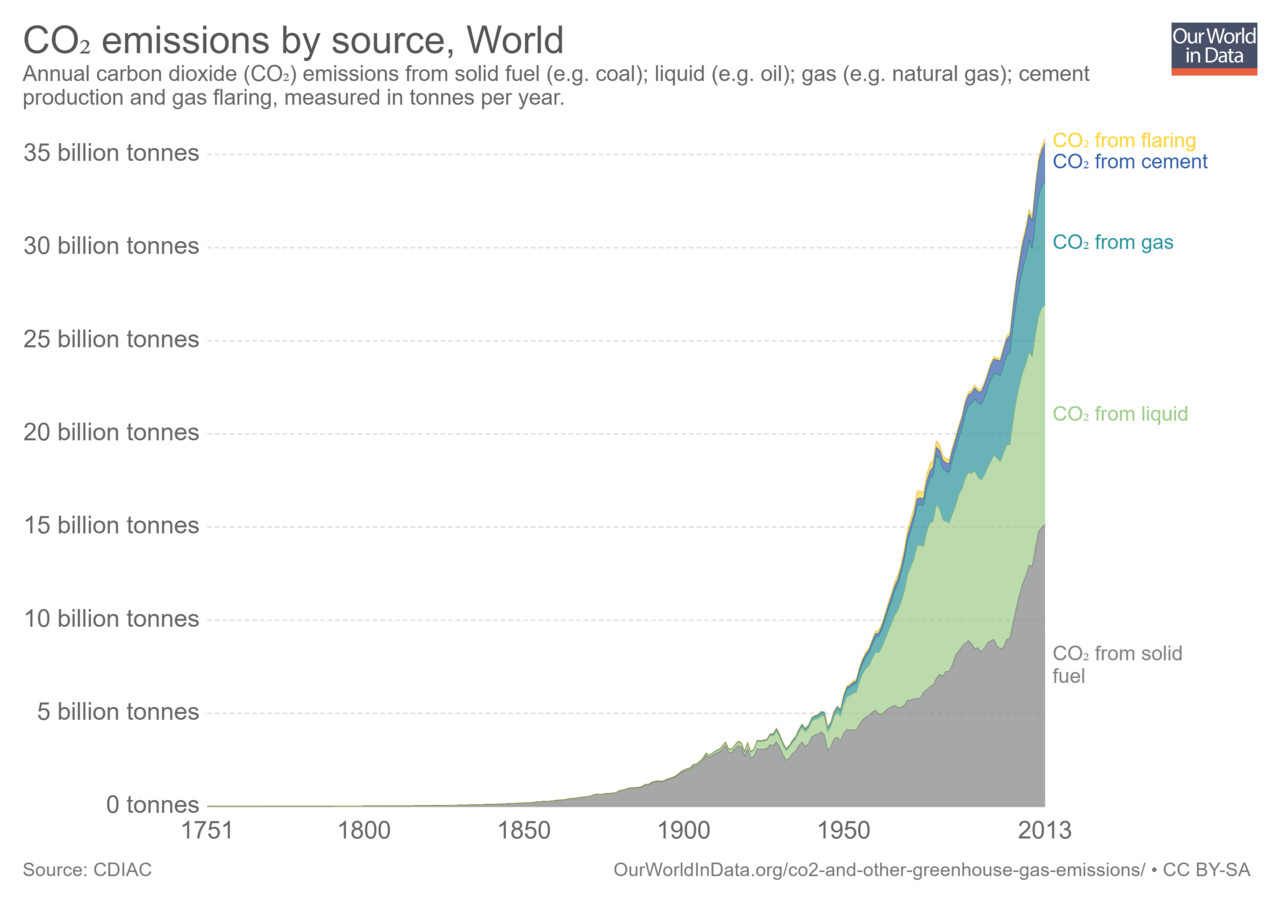 According to a 2015 paper titled "Causality among Energy Consumption, CO2  Emission, Economic Growth and Trade" by P. Srinivasan  Et. Al. "the study detects one-way causation that exists from energy use to CO2  emission and trade" [3]

A one-way causation is a pretty big deal in Science; it means one thing directly causes another.

Wait, what about renewables?

Usually when we talk about renewables, we are actually talking about Biofuels, Biogas (organic matter to liquid fuel), or energy capture devices that transform mechanical energy into electricty: Photons to electrons (Solar PV), air flow to mechanical to electrons (wind)

So if you take a pie chart of electricity generation, it looks promising! Hydroelectric is at 17% for example. [4]

But as you take a step back, and you include all types of energy that are not in the form of electrons, you end up with this much more depressing chart: 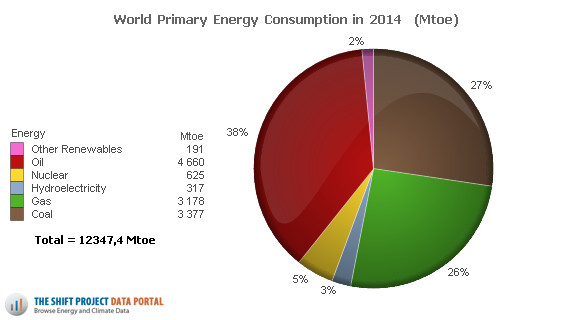 And even worse, look at how renewable energy barely keeps up with the growth rate of fossil fuels:

Okay, but what does all of this has to do with our cool dystopian sci-fi stuff?

If Sci-fi is a way to explore pressing issues by projecting them into the future, I believe we are collectively under-utilizing the medium.

Based on what we know today, the dystopias and utopias that we draw should look much different.

Don't get me wrong, spaceships and sprawling polluted megacities are very cool to paint. But I think if we care about science fiction as an art form, we should try to understand the world a little bit better.

To me, science-fiction is a what-if? engine, and what makes it so great is that you try to portray everything normally past the first what-if?

Then you develop your story around it and make it look cool, congratulation you made a sci-fi film.

So here's why your 2050 dystopia is weirdly optimistic:
If your dystopia focuses on a repressive totalitarian government in a super technological mega city you are assuming that we are going to solve the energy/climate dual problem. That in itself is already science fiction! So now it's not "what if x" It's "what if x AND we solved the climate/energy problem". Same thing with interplanetary travel, you are assuming that there will be a sufficient civilization and investment to support such an industry.

Physics and engineering today tells us that your mega city in 2050 is either:

• Powered by coal and divided over the issue of what to do with the climate refugees, they camp outside of the city's makeshift walls, constantly - under the watch of the super armed state police.
• Powered by coal and slowly sinking into the sea. Most of the poor people live on platform boards or use briges to cross over crumbling high rises while the rich live on the hills.
• Powered by renewables but only the main systems of the city are operational, hunger drove most of the population out of the city and back to the farmlands. Buildings are abandoned, cars are stripped of their engines to power agricultural machines on rudimentary biofuels. buildings are stripped of their copper to make motors for home-made wind electricity generators. The few that stay in the city are organized in Organopónicos, a system of urban agriculture that was developed during the fuel shortage following the fall of the Soviet Union in Cuba.
• Powered by nuclear but it's actually one of the last operational city on earth. The population is growing concerned about the supply of Uranium and Thorium, some even say the government is hiding the fact that there is only 10 years of fuel left as the rest of the world placed an embargo on Uranium.

All of these examples are world-building based on ONE of the challenges of our time, there are many ethical, social and technological challenges to explore. That said it's clear that energy is the cornerstone of civilization, so maybe we should link it.
• What are the ethics of climate accountability? Who is going to pay for the damages? Are hordes of hungry displaced civilians going to siege the fossil fuel billionaires's doomsday retreats and hunt down their yatch around the world's acid oceans?
• What are the social implications of an energy descent? How would cooperation triumph over egoism? Would a low energy world be more or less democratic? How would a woman living in France see her sister across the Atlantic Ocean once all fossil fuels are banned for civilian use? Would Sailing make a comeback? In that case, wouldn't piracy also make a comeback?
• How would small communities share and access knowledge trough technology? Will they repair phones and turn them into simplistic low-energy web servers? Will human-powered velomobiles deliver news from town to town on broken roads?

I've been researching the energy/climate problem extensively for the past few months, and let me tell you; there is no miracle solution.

I'm very concerned that our imaginative output as artists almost never reflect this impending energy descent.
I'm wondering if it's because few people are aware of the problem, or is it rather that we don't know how to portray it?
I think I'm in the latter category, I want to make art that reflect this post-carbon vision of the future, but I wanted to make sure to do my research first.

How do YOU imagine 2050 to look like?
Permaculture Utopia? Thermonuclear weapons aimed at the biggest Co2 emitting countries? Desperate measures like dropping sulfuric acid in the atmosphere [5] gone wrong?

Let me know in the comments below!

[5] A Cheap and Easy Plan to Stop Global Warming