Before I get started, I would like to thank you all for following me along on this journey. I know that what I write is not necessarily comfortable or nice to hear, so I really appreciate the time you take to read this.

At the time of writing this post, there are now 20,000 of you, thanks for the support!

Around Christmas time last year, I tried formulating the problem by writing Your 2050 dystopia is weirdly optimistic, and invited artists to create art that better reflect the challenges of our time.

But before urging everyone to join this art movement, I had to try and define it better. It took 4 months of reading very depressing scientific papers about energy supply, solar radiation management side-effects, and the climate feedback loops before I could come up with any ideas worth painting.

I'm not going to attempt to create sharp razors for now, I think it's a fuzzy border, (Waterworld could fit in, for example). What I can think of however is a list of checks:
Does your collapse lead to more than 90% of the world's population to die? If yes, it's probably post-apocalypse, not post-collapse. Is the problem the same everywhere? Or is each region affected by different problems and reacting differently? etc.

This chart helped me a lot in defining what types of images I would or would not paint. I will not for example paint extreme sea level rises where the top of the buildings is underwater. I think it's been done really well before, and it's the middle-left of the futurism spectrum that is more interesting to me. Future pathways where it's not the apocalypse, but humanity is definitely not handling the involuntary de-industrialization well.

In a nutshell, my working definition was:

Post-collapse futurism is an art movement  focused on showing the policy and cultural failures of today manifested into the hardships of tomorrow.

It’s upon the completion of the third painting that the path forward cleared up a bit; With this type of artwork, I had the potential to start conversations that are usually uncomfortable or showcased as a partisan issue when explored by media outlets.
I think Cli-fi as a definition of sci-fi focused on climate change is a great start, but it looks like it's mostly confined to the writer spheres at the moment. I also think it's a bit limited in it's own brand, since the climate crisis is only one out of 10 different major challenges facing humanity in this century. If the climate crisis barely gets any coverage, It's even worse for the 10 others. For example, I could barely find just one good article about topsoil depletion outside of academia.

I realized that I also had the opportunity to plant the flag, to engage other artists in creating this kind of art, and lowering the barrier of entry between caring about climate change and having a finished piece.

Phase I is about planting that flag. I would say I’m just at the beginning of this phase but it’s already pretty promising. I'm lucky to have incredibly supportive friends and family who helped me trough depression and at the earliest stages of this project.

Here’s some of the things in the works for phase I:

We often think of disasters as isolated, one time events: brief trials to be overcome, that humanity will bounce back from, stronger than before. Rarely do we imagine disasters or states of crisis to be our new norm. In my work, I explore what that existence looks like. One where there’s no disaster relief team coming to the rescue, because the slow global collapse of civilization is the disaster itself. Like time travelers, this series lets us take a peek into a very likely version of our future. If we don’t like what we see, we need to change our present, now.

Due to the inertia of the fossil fuel infrastructure the world relies on, our planet is guaranteed to increase temperature by another 3°C. Unless governments change their priorities or economic growth grinds to a halt, this future is already history.

If humanity’s “Plan A” is to solve our current challenges of global structural failures and systemic problems through infinite growth of technology and energy with no compromises, the intent of my work is to highlight our total lack of a “Plan B.”

My hope is that exposing the fragility of industrialized countries and painting their future in a state of post-collapse will increase our empathy for those suffering from disasters today and help people visualize what life looks like, not so very far now if we won’t strive for change together.

Time travel with me now, to the not so distant future, where we will visit our world as it’s currently on track to become.

Welcome to this historical retrospective of the late 21st century. 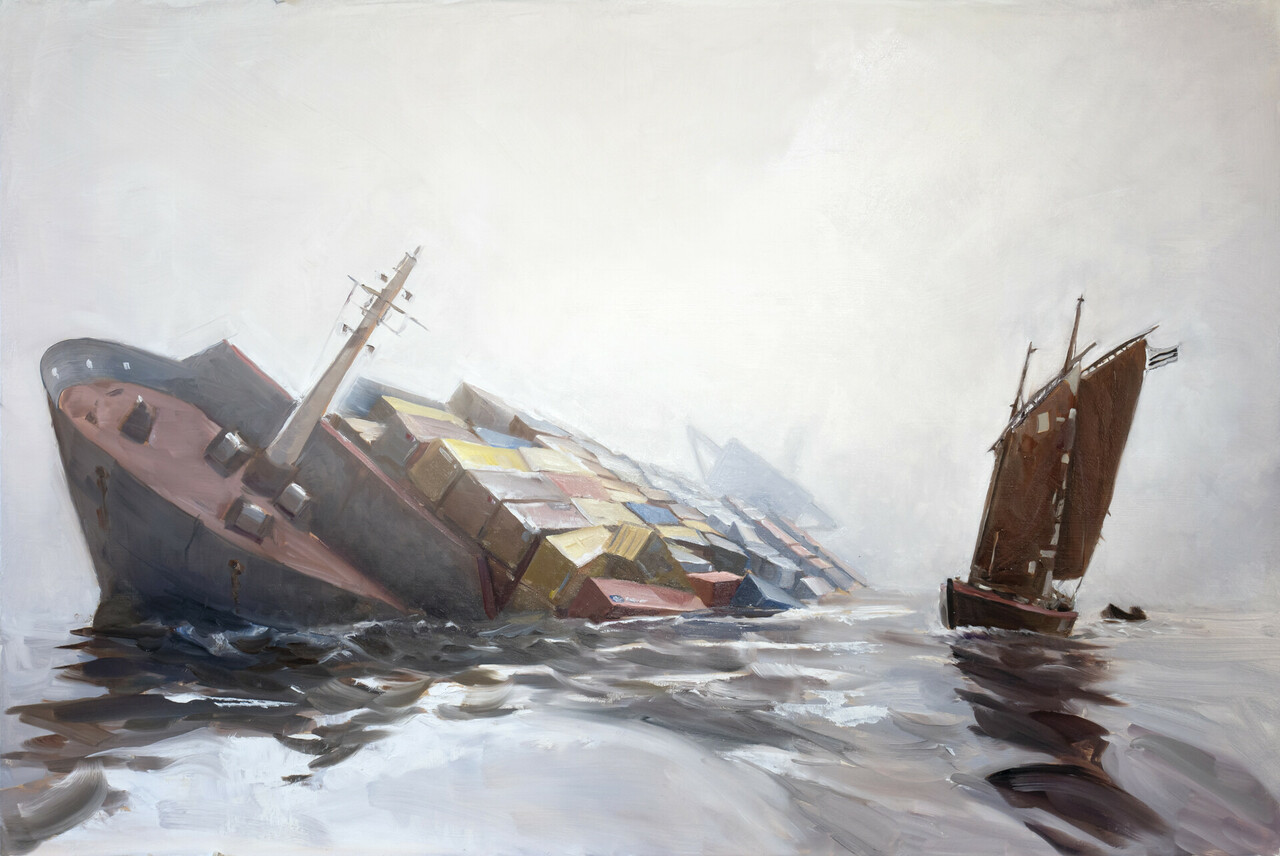 Efflam Mercier was born and raised along the coast of Brittany, France. After working on 3D animated films in Paris, Efflam moved to Los Angeles to design the fantastical, imaginary worlds of video games -- from dragons to shipwrecks, scavenger cultures to risen dynasties. Yet, however fun dreaming up the wild and thrilling landscapes of fictional, escapist worlds might be, Efflam’s heart has always been deeply concerned for this world. Our world. The world you can’t change with a brush or photoshop. The world that can’t be reimagined or rebooted if we don’t like what we see. The world we can only change if we all pull together.

So he decided to paint a different kind of future -- not scifi, not fantasy -- but the very real future we all might face if things don’t change. This series is Efflam’s way of starting a conversation we all need to have now. There is much to fear about our future’s prospects. But there is much to take hope in, as well. That hope starts with each other. So let’s step into this version of our future together, take a look around and discuss if it’s the history we want to paint ourselves into.

Efflam usually paints digitally using open-source softwares, however he recently switched to traditional mediums like oil and acrylic, fearing that digital art will not be archived if industrial civilization collapses. 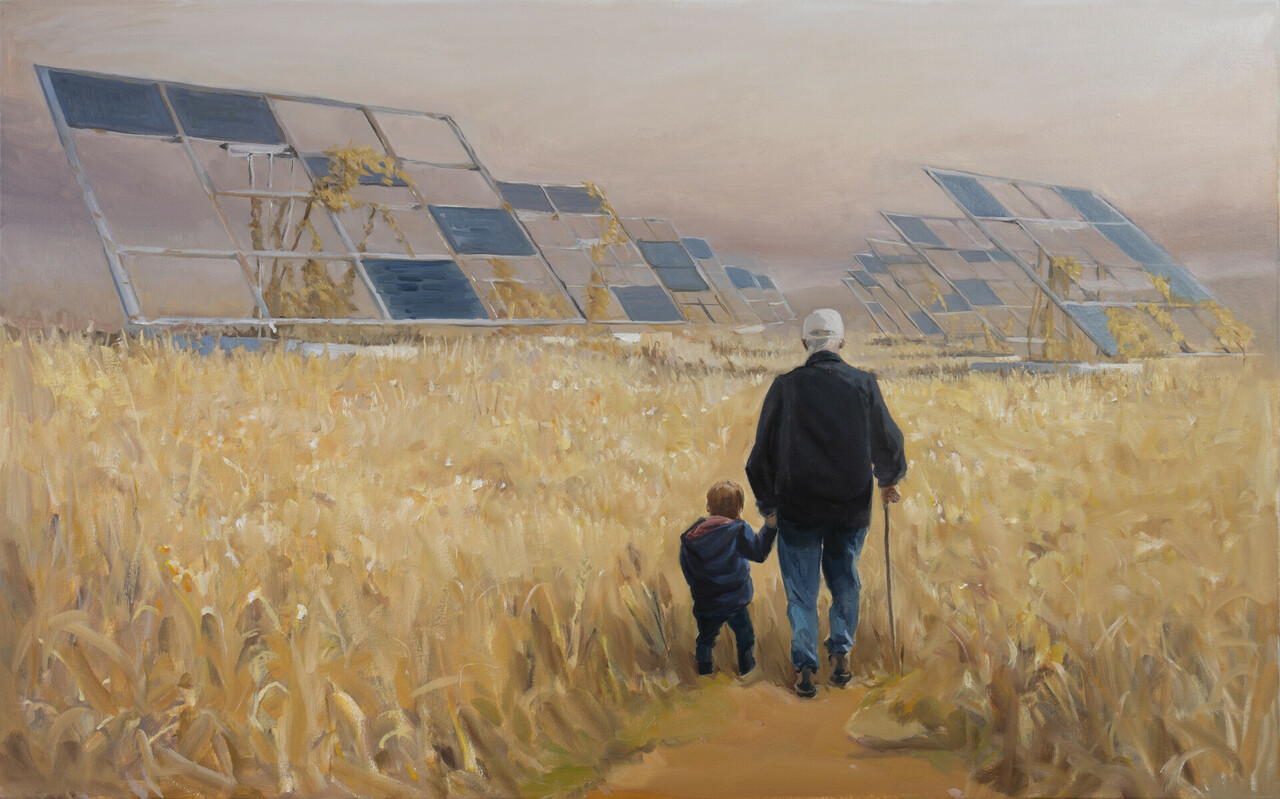 Thank you for reading this post. I hope the statement and biography helps explain why I'm doing this Painting series.
If you started following my art for the dragons and the knights doing knight stuff, I'm sorry to disappoint, but I will probably not paint any more in my free time for as long as the urgency of the climate crisis supersedes my desire to draw fun escapist things.
I found my calling with this project, and I'll pursue it no matter the personal cost.

The way I rationalized staying in the entertainment industry is that it will allow me to make no compromises and pull no punches when I do my personal paintings. On the other hand, if I went and did those paintings full-time, I would probably be biased over time to make art that is safer and more decorative in order to sell, and I would end up hating it. This is why you can still expect me to post fantasy and sci-fi art from the games and movies I work on, so stick around!

PS: Did you know The royal baby Archie got more press coverage in a week than the climate crisis did in the entire year of 2018? Let me know your thoughts below!